skip to main | skip to sidebar
Home » Magic » What Do You Know About Dracula?

What Do You Know About Dracula?


Dracula is a human figure that canines have a weapon for him to prey in the night, we encountered many human figures among other vampires around us many people dress up as Dracula and even the style of such films displayed in your child's favorite vampire movie. but the actual human figure dracula we often see or we find it is just a manifestation and example of imagining / fiction 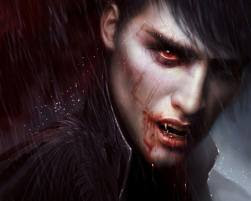 Judging from the stories and history turned vampires do exist and when even this figure is still frequently heard, and we have encountered several such images in books, news etc.

A life story of Dracula figure among all people is a real form of manipulation is believed by western people there.

History of vampires originated from the novel by Bram Stoker called Dracula, and then character Dracula began filmed as Dracula's Daughter (1936), Son of Dracula (1943), Hoor of of Dracula (1958), Nosferatu (1922), which was remade in 1979 and Dracula films that others are packed in a more moden like Twilight.

As in a book entitled "Dracula, Slayer Muslims in the Crusades" by Hyphatia Cneajna, the actual story is a magnifying Dracula of Wallachia, Vlad Dracul thoroughbred.

. Both sides are equally as trying to master and fought over their own territories in both Europe and Asia. This war is peak fall of Constantinople, when the castle was in the hands of power Kristian Ottomans caliphate. 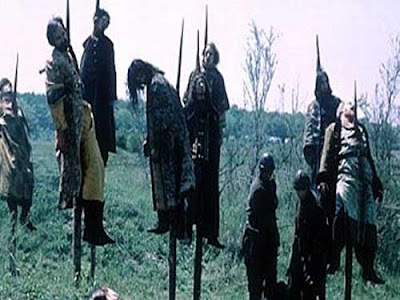 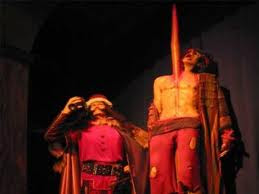 Dracula figure in the history of the war was one of the commanders Tentera Cross. In this war many Dracula murder of Muslims. Hyphatia exposing cruelty Dracula toll reached 300,000 Muslims. The victims were killed in various ways that are very barbarous and cruel, which is burned alive, nailed his head, and the most vicious is impaled., That is the way a person was stabbed in the rectum with wooden arm of an adult who ends sharpened. Victims who had been stabbed and then put that stake to penetrate the stomach, esophagus, head to penetrate through the mouth.

Hyphatia Says In His Book:

"When the sun started rising immediately commenced Dracula ordered the impalement. The soldiers do the commands such as robots that have dipogram. Impalement embroidered with screams of pain and cries of agony soon meet all over the place. They, the Muslims at the time of death is being picked up in a way that is so horrible. They do not have time to remember the good memories and sweet they've ever experienced.

" Not to adults who are victims of atrocities impalement, but also the baby. Impalement neighbor Hyphatia provide exposure to the baby as follows:

"Babies do not have time to cry kerana impaled them terrible pain when hujung wood penetrating his stomach. The bodies of the victims at the stake stretch to pick up his end. "

Cruelty as has been described above that which has been hidden by the West. According Hyphatia this happens kerana two reasons. First, gang murders - Dracula crowded committed against Muslims should not be eliminated from the Crusades.


Country - Western nations during the Crusades into the main stump Tentera Cross, did not want his face smudged. They include the condemned and opposed the troop killings - crowded by Hitler and Pol Pot, do not want to open their own disgrace. And this is already a Western character who always wants to look like a hero.

Dracula is a hero for the Crusaders. Whatever the severity of Dracula, his good name will always be protected. So at this moment Romania, Dracula is still considered a hero. Were largely as historical heroes - heroes will definitely be taken as a superhero and discarded all the ugliness, evil and weakness.

To cover their atrocities, the West constantly hide who the real Dracula. They are trying to make history real identity is not revealed Dracula. And, it must be admitted that Western efforts to change the history of facts into a fictional Dracula was quite successful.

The general public only knew that Dracula is a blood thirsty vampire Lagenda, without knowing the real story. 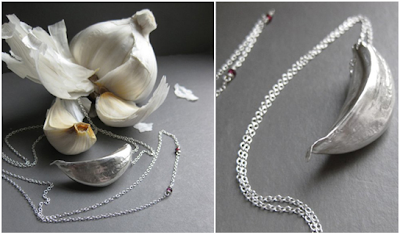 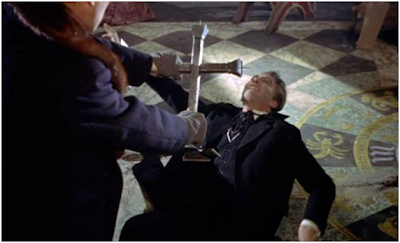 On the other hand to dismantle the lies perpetrated by the West, the book explores the meaning of the cross Hyphatia the Dracula story. Among other commonly known anything like the portrayal of Dracula bahawa who has been a fiction should not be released from the two objects, the garlic and the cross.
It is said that only the two objects are Dracula will be scared and defeated. According Hyphatia use of the cross symbol is a way to remove traces the history of western hero mujahideen of Islam in the Crusades, as well as to demonstrate their prowess 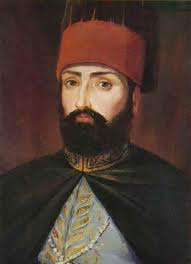 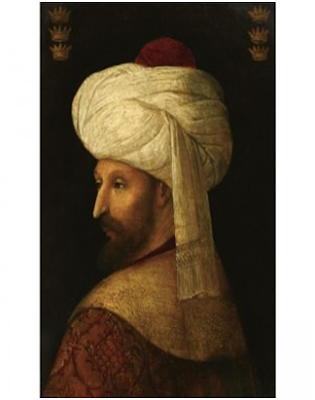 Sultan Mahmud II (known in the West as the Sultan Mehmed II) and also recognized as Al-Fateh Islamic history. The sultan is the conqueror of Constantinople who once conquerors of Dracula, he is a man who has been defeated and beheaded by the Danua Snagov Dracula. But the west is trying to distort the facts.

They desire in order to create a narrative history that they looks beat Dracula. Then created a fiction that Dracula can only be defeated by the cross. The goal is to want to eliminate the role of Sultan Mahmud II as well as to show that they are the most powerful, can defeat Dracula the Bloodthirsty. 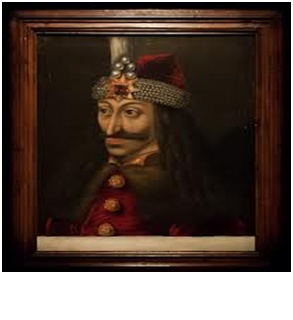 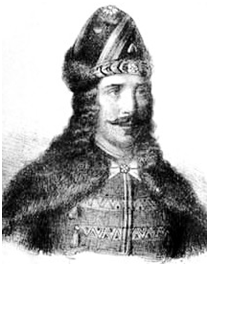 Vlad Tepes Vlad III (1431 - 1475 AD) or more popularly known as Dracula was born in Transylvania, Romania. He is the son of Vlad II to 2 and Cneajna, a daughter of Moldavia. Dracula ancestors, Randu Negru, is the founder of the kingdom of Wallachia, a kingdom which is limited by the Danube River and Mountains Carphatia. When viewed in the map of the world today, Wallachia became part of the Romanian state. Cottonwoods Negru then breed in the region. One of his descendants was Basarab / Vlad Dracul-"Dracul" means "dragon" - who is the father of Dracula. Dracula was the second son of Vlad Dracul. Dracula has a real name Vlad Tepes. Dracula name itself comes from the Romanian language, Draculea. Suffix "ea" in Romanian means "son of", so Draculea means son of Dracul.


Dracula in a small period of time did not last long, because the children are often left his father in every aspect of warfare makes Dracula grow up to be happy. Unhappiness was compounded when, at age 11/12 years he and his brother Randu should be sent to Turkey, he should be a prisoner of the Ottoman Turks, to ensure the loyalty of his father. Though in Turkey he was treated well but Dracula feels that he has lost his childhood, home, mother and family. From Dracula's hatred of the Ottoman Turks began.

Dracula nearly 5 years in Turkey. When usinya moved 17 years,
Verna after the war, a conflict between Vlad II and John Hunyadi, which led to the death of Mircea II and Vlad, Dracula's brother. Looking at the political changes in Wallachia, the Ottoman Turkish sultan Mehmed II sent home to the Dracula of Wallachia to seize the throne.

Dracula back to Wallacia with 8000 soldiers on guard Turkey ottoman. when he got in Tirgoviste (capital of Wallachia) battle between the forces of Dracula Vlasdisav troops, who finally won by the troops and putting Dracula Dracula as ruler of Wallachia.

Since the reign of cruelty Dracula began to appear. Having succeeded to the throne, Dracula massacred Ottoman Turkish soldiers left the way at stake, it becomes a cause of animosity between Dracula and Sultan Mehmed II. During his reign that lasted only 6 years old he had slaughtered more than 500,000 residents of Wallachia. Of course the number of casualties could not be said to be small in the context of the Middle Ages.

Hundreds of thousands of victims of the massacre were killed Dracula vile manner. Tortured before they were killed first. Various torture Dracula. Dracula torture methods used to torture his victims, among others: impalement, boil the victim alive, nailing the victim's head, neck ensnare victims, damage vital organs of women, and a few other methods of torture no less cruel. Among the methods of torture impalement is the most famous. Impalement is torture by inserting wood-arm for adults who have dilancipkan end-into the anus. After sula entered the victim's body and then implanted so that the stake continued to penetrate the victim's body to go through to the neck, back, or head. Usually this kind of torture carried out by Dracula in bulk, so once did "ceremony" impalement number of victims could reach 2,000 people.

Most of Dracula's victims are mostly Muslims. it became one of the causes of hostility between Dracula and Sultan Mehmed II. After Dracula's actions sent a letter to the king of Hungary at that time (Matthias Corvinus) to enlist the support of the Hungarian kingdom to fight the Ottoman Turks. 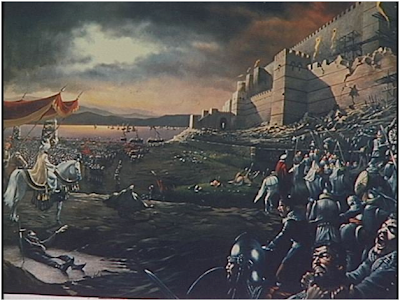 Sultan Mehmed II declared war on Dracula. At the date of May 17, 1462 M Sultan Mehmed II (the conqueror Constantinople) sent 60,000 troops plus 30,000 non-regular army. While Dracula army of 30,000 soldiers, saw the number of unequal forces, dracula do grilya war strategy (Hit and Run)

At midnight raid dracula-strong army of 10,000 men succeeded in pushing Ottoman Turkish forces, but can be beaten back by the time dawn arrived, the defeat of the army retreated to the castle Poenari dracula, dracula escape from the siege of the Ottoman Turkish forces led by Randu (sister Dracula bladder) to Hungary, with melarikandirinya Dracula, Randu easily captured the fort and seize the throne of Wallachia Poenari.

Month of December 1476 occurred the battle between the Crusaders with the Muslim army (Ottoman Turkish) where the fighting occurred in the area of ​​Snagov, in the fighting forces can be defeated Dracula, and Dracula (Vlad III) were killed in the fighting, his head is cut off and taken to Turkey as proof of his death and the discovery of some photographic evidence that Dracula is dead 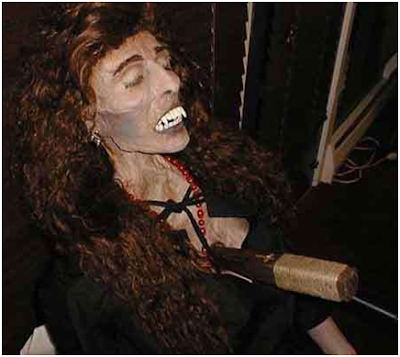 It has been found dead in the picture above is a Vampire who was killed by a resident in the territory of Hungary in the years since have been many reports 1980'an said a villager who had been dead for three years, suddenly rose from the grave and attack his family and managed to suck the blood of four nephew to death and has been reported by a team of researchers from Belgrade in 1732

Typical body around the mouth of no traces of fresh blood mengering.Rambut and has long nails, eyes half open and his heart seems still berdenyut.Sesuai tradition, then it does not look for victims haunt the night, the body is to be killed for the second time by driving stock iron just above the heart.